Dota 2 is a multiplayer online battle arena game developed by Valve Corporation and released for free on Steam. The game is the sequel to Dota, the Warcraft III The Frozen Throne mod. In the game players take part in battles on a single map between two teams. Each team consists of 5 players controlling a unique hero. The game was released in 2013 and has been well received by both gamers and critics alike. Dota 2 along with League of Legends are the two of the most popular free to play games currently available. 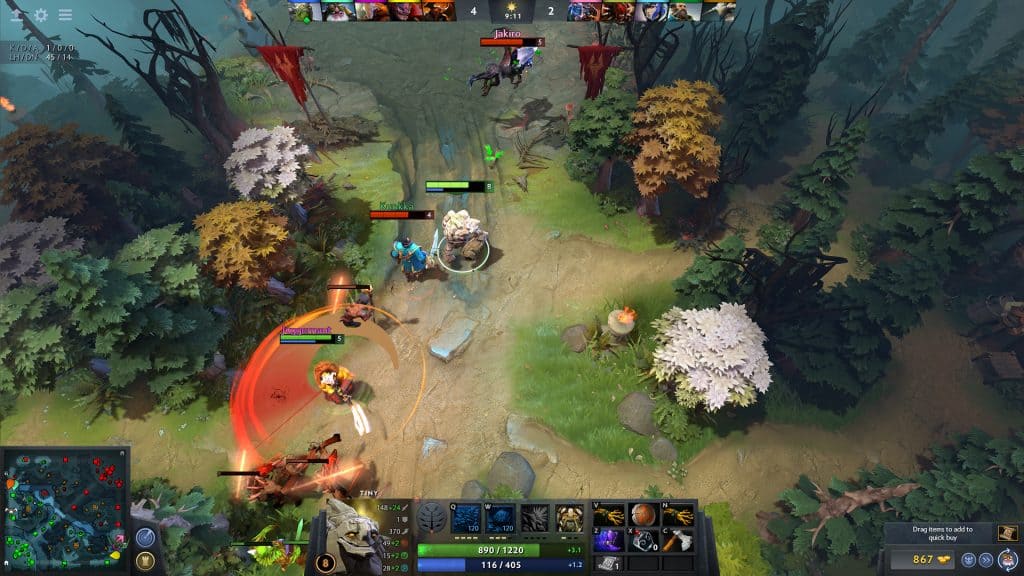 Heroes fighting each other in Dota 2. This MOBA features 117 unique heroes

The primary objective in Dota 2, like most other MOBA games, is for one team to destroy the opposing team’s base or object. In the case of Dota 2 this structure is know as the Ancient. Game play in Dota 2 takes place on a single map with each side being the mirror image of the other. The map is divided into lanes, jungles and the ancient. There are three lanes which are defended by two towers each. In order to destroy the opposing team’s Ancient, players must first destroy these towers. In addition to the towers, each team auto generates creatures known as “creeps” to help with defense. The creeps start on from the team’s base and travel down each lane until the encounter the opposing team’s towers or heroes. Creeps start out the game fairly weak but gain strength as the game progresses.

In addition to the three lanes, players can choose to fight in the jungle areas. These areas contain random creatures which earn your hero extra experience and gold. Each jungle area also includes a special item store which players must visit to acquire components to upgrade their weapons and items.

Dota 2 features 117 unique heroes each with their own special attacks and abilities. The heroes fall into one of nine different roles based on the role they should take on the team of five. The roles are Carry, Support, Nuker, Disabler, Jungler, Durable, Escape, Pusher, and Initiator.

Dota 2 is completely free to download and play. In order to play, you’ll need to download and install via Steam but you do not have to spend a penny to play the game or access any of the 117 characters. The game does include microtransactions that are limited to cosmetic aspects such as player skins, outfits and more.

Dota 2 is free! You should not have to pay anything in order to play.